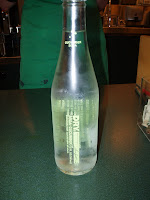 I went to get my haircut the other night, and my barber was ranting about this cucumber soda that his coworker had brought in from the Starbucks down the street. He said it was awful, but me being me, I had to go buy one immediately. Maybe it was inspiration from the pickle chips? The world may never know.

When I stepped into the Starbucks and boldly strode to the counter with it in hand, I asked the barista if she'd tried it. She assured me that A. yes, she had, and B. it was delicious. I asked if it tasted like cucumber water, as in water with a slice of cucumber in it, a refreshing treat I sometimes enjoy. I was also assured that this was the exact flavor of the soda, so I purchased it in good faith that no one at Starbucks would ever lie to me.

I have never been more wrong in my life. Ever. The thing with this pop is that when you first drink it, it tastes like plain club soda. The problem is, about a half-second later, the fake cucumber taste kicks in, and it's the worst thing ever. It's exactly like what I would imagine drinking cucumber-scented lotion would taste like, which is not something that I've ever in my life wanted to do. However, if that's a goal of yours, I highly suggest you go the less-toxic route and drink this pop. You'll love it.