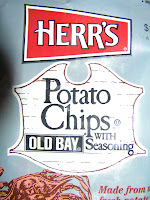 
I'm on the road today, having left my ever-green mountains of the Pacific Northwest and ventured across the spacious skies and over the amber waves of grain all the way to the Big Apple! It's snack central up in here, so I'll be posting as much as I can with all of these exciting new (at least to me) treats!

I've heard of the nearly-mythical Herr's brand of snacks for years, but had yet to try any of their potato chips. I've eyeballed the website and almost bought myself a variety pack about ten times now, but never could talk myself into hitting purchase. Fortunately, they sell Herr's here in New York, and being ever-adventurous, I went for the weirdest flavor on the shelf: Old Bay. The crabs on the bag were definitely the selling point for me, as I have no idea what Old Bay is. I don't eat seafood, but I'm assuming it's some kind of shellfish seasoning? It reminds me of Johnny's seasoning, although Johnny's is traditionally reserved for french fries, mashed potatoes, and other starchy goodies (and Tim's Cascade Johnny's Seasoning chips!), so I'm not exactly sure why there are crabs on the Old Bay bag.

The thing is, though, Johnny's has A. stopped using MSG, and B. has a much better balance of spices. I keep eating these wretched things, hoping for them to grow on me, or some how magically taste good, but they're really, really gross. I've had about five now and I already feel like I'm going to break out from the amount of MSG in them, and the lingering taste of celery salt and a mild spice at the back of my tongue is making me feel like I just ate at some all you can eat truck stop. It just tastes like cheap, crappy junk food. It's hard for me to explain it any other way; I think these just need to be experienced to understand the horror.