Ah, how I love friends from faraway places.  Well, Pittsburgh isn't really all that exotic, but my friend there has a source for zany snacks and just sent me a huge box of them for the holidays!  Merry Christmas and Happy Channukah to me!

The first selection I tried from the box was one that came most highly reccommended from my friend: Lay's India's Magic Maslala chips.  They taste somewhat like I imagined they would - like Indian food, but they've got a real kick that I wasn't expecting!  The flavor is more complex than a lot of American styles.  First of all, the potato taste is good, strong, and definitely a better quality than American Lay's.  It's emphasized with a thicker, ridged cut, similar to Ruffles.

The spice on it taste very Indian, and I don't have a cultured enough pallette on Indian food to draw comparisons more than that, unfortunately.  I eat it often, but I just get whatever the special is at my local lunch cart and don't really pay attention to what any of it is called.  I can taste a sweet undertone at first (likely from the 'artificial raisin flavoruring substances' toted on the back of the bag), then the spicy and the salty flavors come in.  It has a slow burn, dying down after the initial shock, then sitting at the back of your tongue for a few minutes.  My nose is even running a little after having a handful of these.

The bag says that they'll make my heart go, 'DHAK DHAK!', but I wouldn't necessarily go that far.  They do make my tongue happy, however, and I'd definitely get these again if I saw them at a market here in town.  Approved! 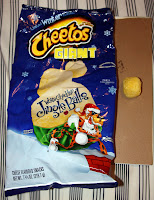 
Seasons eatings, my snacktacular friends!  In the spirit of the season, I picked up these guys in an impulse buy, unable to resist eating something called "Jingle Balls."  Yes, I'm perpetually 12 on the inside, it's true.  The sad fact of the matter is, I was actually at the store to purchase one specific item only, yet the magical magnetic forces of the snack aisle reined me in, whispering sweet nothings to me across the store until I decided to peruse the aisle, you know, 'just to look.'  Next thing I know, I've got these things in hand, plus some plain tortilla chips and salsa to warm myself up on these cold winter nights.  My life.


But all of that is neither here nor there, and you're not here to read about my grocery store adventures, you just want to know the results of my snackapades.  Well, first things first, these Jingle Balls look like giant marshmallows, which threw me off initially.  I have this thing  about food that looks one way and tastes another (Pringles being my only exception), so I was a little worried about taking the plunge.  Nevertheless, I swallowed my fears, opened wide, and shoved one in my mouth, as one has to do with these awkwardly-shaped cheese puffs.  I was hoping for something fantastic and amazing to happen in my mouth, but I was rather let down.  Usually I'm a fan of white cheddar flavored things, such as the many varieties of white cheddar popcorn, but this was just bland and uninteresting.


Honestly, I think Cheetos didn't really think this one through very well.  The thing is, white cheddar is more mild than your run of the mill sharp orange cheddar, so white cheddar flavored snacks need to be either saturated with cheese powder or on a very compelling vehicle to really achieve a good flavor.  These unfortunately, aren't quite cheesy enough for my tastes.  The initial bite is okay, like a mild regular Cheeto, but as you chew, the cheese powder dissolves quickly and you're left with nothing but a film of grease and the taste of mediocre corn puff on your tongue due to the large size of these puffs.


Would I buy these again?  Maybe, because I do like the satisfying feeling of the giant puff melting in my mouth, even if it doesn't taste quite as I'd like it to.  I'd likely purchase the regular flavor though, or the red hot kind, just to get more flavor with that feeling.  Approved, but just barely.


Purchased at Fred Meyer, Portland, OR
Eaten by Neon Starlight No comments:


I can has cheeseburger, but I can also has cheeseburger Pringles! However, I'm pretty sure I'd rather have the real thing (vegetarian, of course). The Restaurant Cravers line of Pringles is one of my favorite new snack lines, but the cheeseburger flavor is definitely my least favorite of the bunch. It's not that they're bad, per se, they're just lacking. With all of the other Cravers flavors, upon the moment of the flavor powder touching my taste buds, I was in snack heaven. These? Not so much.

To start off, the flavor is weak. It tastes like a very mild barbecue chip, instead of an intense flavor like other Pringles. It takes a moment of getting the palate adjusted before you can actually make out some of the individual flavors, such as the grilled meat, the ketchup, and the onions, as opposed to the 7-layer dip flavor where you can instantaneously taste all seven layers.

All in all, I wouldn't buy these, but I'd eat them if they were around. On the fence.

I'm much like a goat, as I've mentioned before, and I'll pretty much eat anything (see Chinese Cherry Blood Clot Candy). I did not finish this candy. God knows I tried, I tried so hard, but I couldn't do it.

The candy itself isn't so bad, it's just a sugary hard candy. The bad part is the salted plum in the middle. As soon I tasted that, I literally started gagging, and let me tell you, there are not a lot of foods that make me gag.  The only foods I can think of that trigger my stomach to go in reverse are cottage cheese, Jones Brussels Sprouts soda, and now this. Fail. So, so hard.
Eaten by Neon Starlight No comments:

Hey Snackies!
Well feed me garlic and call me Stinky, people actually read this thing!  I had no idea.  Life got a little full of crazy and a little depleted of snacks last summer and kept on keeping on for awhile.  However, I miss writing this blog, so I'm going to do my best to get back into the snack-eating swing of things.
Also, I believe my snackmaster@ieatsnacks.com email address is working again, so feel free to say hi!
-Snackmaster

Eaten by Neon Starlight No comments: