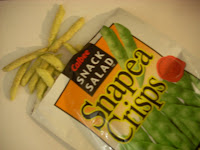 
God bless the USA. My friend recently acquired food stamps, now that she and her job have unfortunately departed, and they gave her approximately 4 times what I spend in a month on food. Naturally, the first thing we did was run out to the store to buy snacks! After realizing that food stamps work at Whole Foods, we went there, because they have the best weird snacks. One of the treats we ended up with is Calbee's Snapea Crisps.

Now, the picture on the front of this bag is highly misleading, because it depicts some crispy looking peapods. I'd assumed that this would be some kind of baked-not-fried in tact vegetable snack, like Trader Joe's green bean snacks. I could not have been more wrong! As you can see in the photo above, they are vaguely peapod-shaped puffs, made of rice and pea flour. The flavor is distincly pea, but with the puff texture and the salty tang, they taste a lot like some bizarre vegan Cheeto.

I realize that my description makes these sound awful, but honestly, they're simply scrumptious! My friend is picky about my 'weird' food choices, but she and I actually agreed on these ones. Definitely worth a try, and they aren't nearly as healthy as they seem. They paper I set them on to take the photo was covered in grease spots afterwards. Om nom nom!