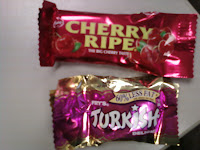 It's always exciting to open my email at work and find something snack-related. Today, I thought I really hit the jackpot! My coworker returned from Australia with a huge bag of weird candy! I snagged a couple different kinds to try, so today you get a two-for-one review! And a lot of exclamation points! Woot!

I love it when things go from bad to worse, so I'm going to start off with the Cherry Ripe. This little guy sounded like it would be the terrible one of the two, but it actually wasn't too bad. The package describes it as, "Ripe juicy cherries and coconut in 'Old Gold' rich dark chocolate." I would describe it as, "Kool-Aid flavored, chocolate-covered blood clot." I tried to take a picture, but my fancy camera's at home and my cameraphone just didn't do it justice. All in all, this actually didn't taste like much other than Kool-Aid, and I can drink that stuff by the gallon, so this is okay by me. If I ever go to Australia, I won't be hunting it down, but I'd rather eat this than Vegemite!

However, if faced with a choice between Vegemite and my other Australian 'treat', the Turkish Delight, I might choose death instead. The Turklish Delight slogan is apparently, "The bar that is different," and I'll have to agree. Different doesn't necessarily equate good in this case, though. This thing tastes like licking the inside of a poorly sanitized bathroom in a train station. In fact, it was so terrible that I only was able to take one bite before throwing the rest away. Trust me, that's quite a feat, because I'll eat just about anything. I've been referred to as a goat on more than one occasion.

In conclusion, from what I've had so far from Australia, their snacks suck. It makes me never want to go there. I propose a challenge to you all (all 2 people that read this, ha ha): Someone send me something Australian and delicious! Please! I have friends there I'd love to visit, but I need to be convinced!