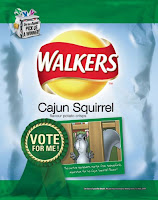 
A friend of mine recently traveled overseas, and I gave her my usual request that I give everyone when they ask me what I want brought back: “The weirdest chips you can find. Make sure there’s no actual meat, but meat-flavored is cool.” I’m a vegetarian for ethical reasons, but still miss the taste of meat. Generally, everyone forgets and I end up with a souvenir shot glass or magnet, but this time, my girl pulled through and brought me Walker’s Cajun Squirrel Crisps. Upon having the bag presented to me, I had to take a moment of silence to compose myself before the emotional logorrhea of gratitude started pouring out of my mouth. I almost cried.

The chips themselves are part of a promotional contest that Walker’s is putting on, with other flavors including Fish and Chips and Builder’s Breakfast, amongst others. I had to restrain myself from asking why she didn’t bring me all of them to sample. We gleefully opened the bag and were hit with a powerful wave of a definitively Cajun scent: spicy, peppery, and meaty. I popped one of the oddly-orange-colored crisps into my mouth and was assaulted with the flavor of what can only be described as greasy, spicy meat, with an emphasis on the greasy. My father told me a tale of his youth where his friend’s mother served him raccoon for dinner one night, and based on that description, I’d say these chips are right in line with the essence of animals usually reserved for roadkill. Everyone that I made try them got sick, self included, so I can’t say I’d recommend them for the weak of stomach, but for those with a stomach of steel and a palette to match, it’s a once-in-a-lifetime experience that can’t be missed.